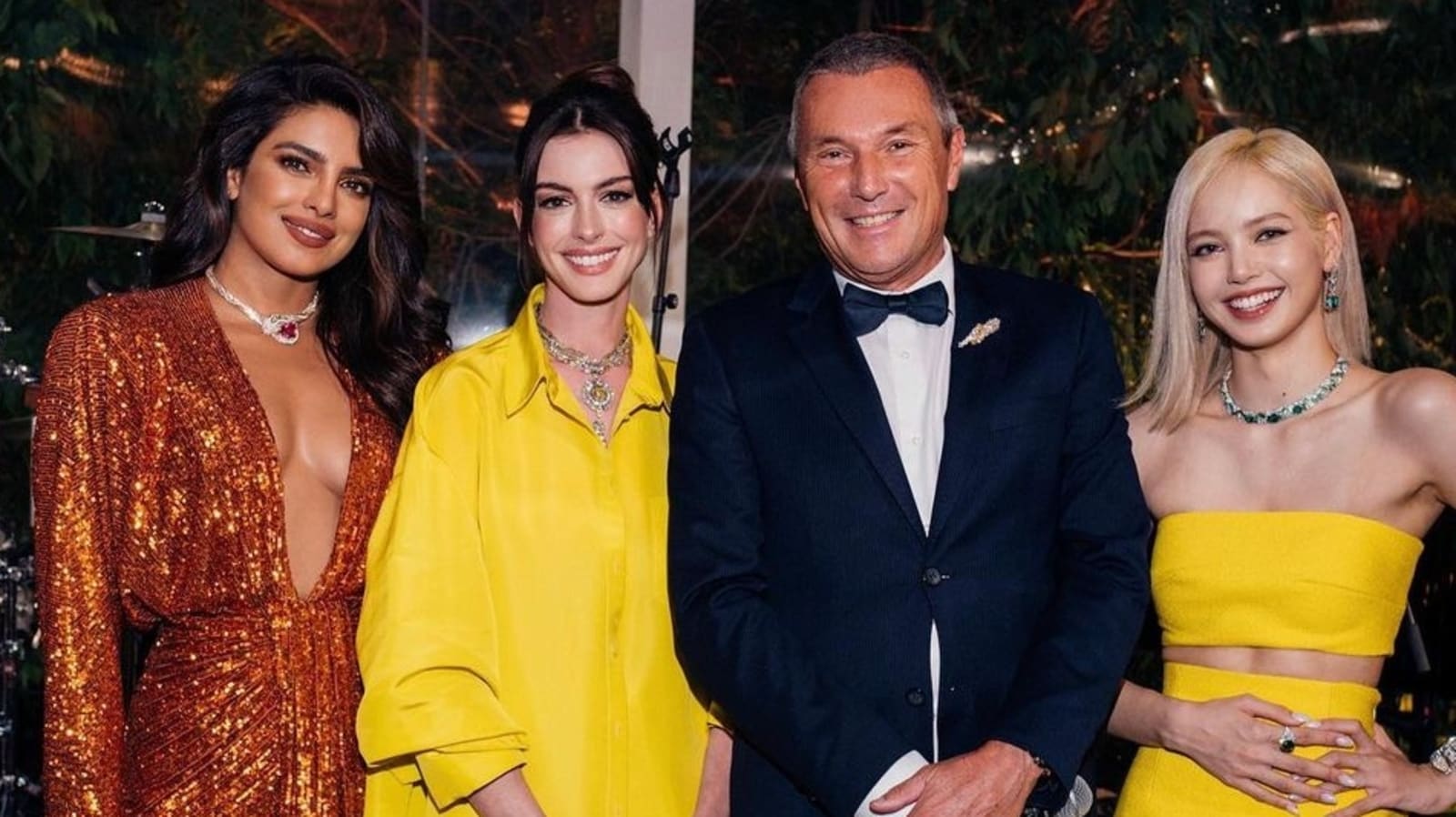 Actors Priyanka Chopra and Anne Hathaway, and K-pop singer Lisa of BLACKPINK graced a Bulgari event together in Paris on June 7. Days after Priyanka shared a star-studded photo from the event on Instagram, the Hollywood actor on Friday posted a new photo from event with Priyanka and Lisa. Anne also shared a solo photo showing off her massive diamond pendant. Read more: Priyanka Chopra bonds with Anne Hathaway and BLACKPINK’s Lisa in Paris, fans say ‘are we dreaming’. See pics

At the Bulgari new collection launch in Paris, while Anne and Lisa from the Korean band BLACKPINK had a twinning moment in yellow, Priyanka wore a shimmering orange dress. All three Bulgari ambassadors sported breathtaking diamond necklaces. Apart from posing solo on the red carpet, Anne, Priyanka and Lisa were captured together in a photo with Bulgari CEO Jean Christophe Babin.

Sharing the photo on Instagram, Anne wrote in the caption, “Still on cloud nine from Bulgari’s stunning gala in Paris. What an unforgettable evening.” One of her followers commented on the post, “Too much elegance.” Many also commented ‘wow’ on Anne’s photos.

Following the event in Paris, Priyanka shared a selfie with Anne and Lisa on June 7. She shared it in an Instagram post with the caption, “And then there was us… girls just wanna have fun!” Photos of Priyanka, Anne and Lisa wearing jewellery from Bulgari’s Eden The Garden of Wonders High Jewelry collection were also shared by the brand.

The Italian house appointed Priyanka Chopra as its global brand ambassador in June. “I have always admired and been fascinated by Bvlgari’s magnificent works of arts, so many of which celebrate some of the most precious resources of my homeland. From the rare colourful gemstones used in Bvlgari’s timeless jewellery creations to the scented flowers which become the main ingredients of its luxurious fragrances, we connect so organically over our love for India and the beauty it has to offer,” shared Priyanka in a statement.

On Thursday, Priyanka posted a series photos and videos on Instagram to celebrate her mother Madhu Chopra’s birthday. The actor also shared a glimpse of daughter Malti Marie Chopra Jonas in one of her posts.

Meanwhile, earlier in May, Anne made her Cannes Film Festival debut, while promoting her new film, Armageddon Time. She was accompanied by her husband, Adam Shulman, as she walked her first-ever Cannes red carpet. Her looks at Cannes 2022 were well received by critics and fans on social media.