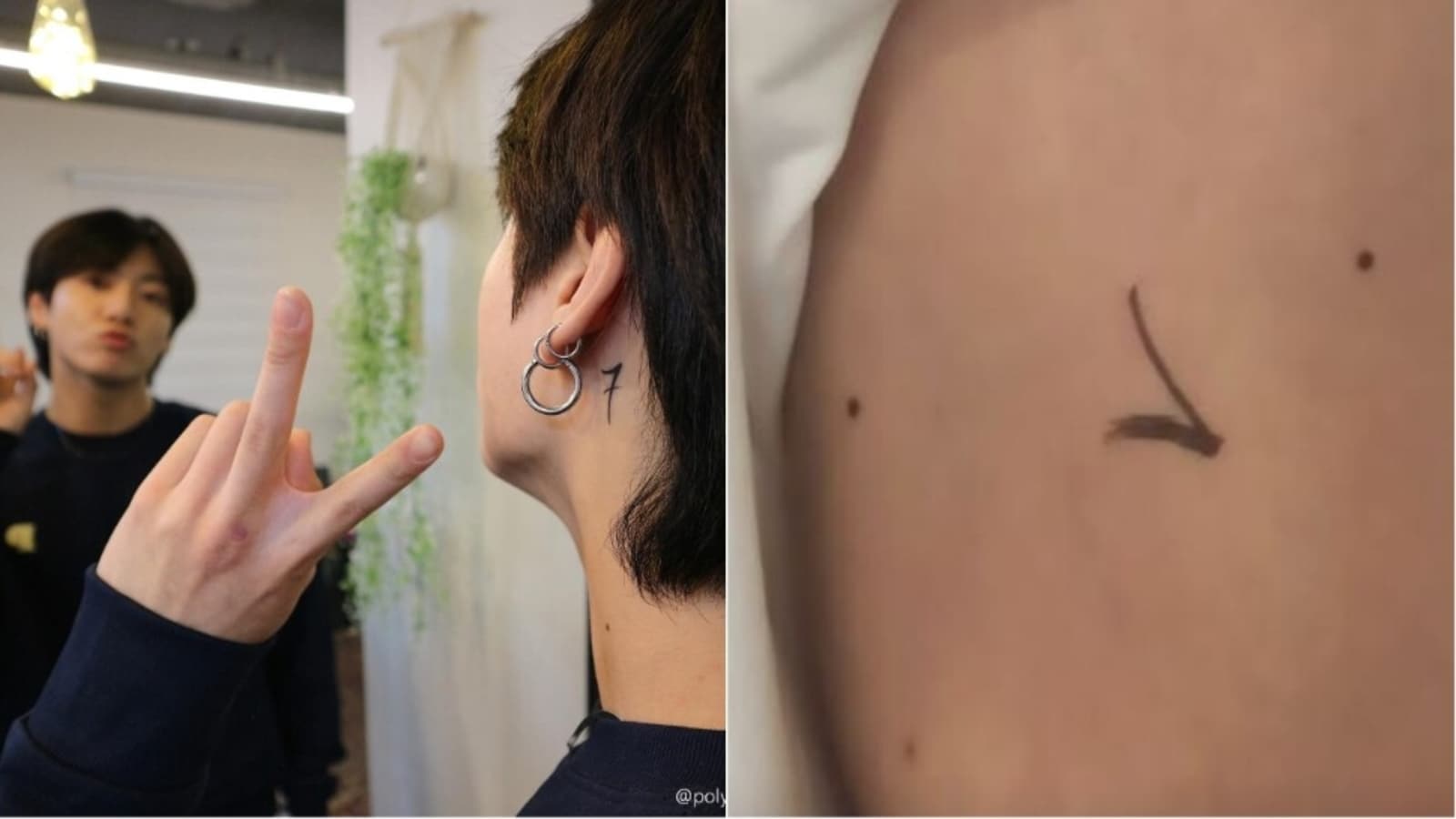 BTS members V aka Kim Taehyung and Jungkook finally got their friendship tattoos inked. V got his tattoo inked on his arm, between two moles. Jungkook got ‘7’ inked behind his ear, as revealed by his tattoo artist. Taking to his Instagram account polyc_sj, the artist shared several pictures of Jungkook’s tattoo sleeve. (Also Read | BTS: J-Hope reveals his ‘7’ friendship tattoo day after group announced break, shares V’s clip from Yet to Come sets)

In the pictures, several new designs and colours were also seen added to Jungkook’s existing tattoos. The artist also added his ‘nickname’ on Jungkook’s arm. On his arm, Jungkook added ‘Bullet Proof’ in blue over the space, which previously had an eye, he also coloured his previous black and white mic to blue. Sharing the pictures, the artist wrote, “BTS friendship tattoo ‘7’. And Cover up collection. Thank you Jungkook.”

In another post, polyc_sj shared a photo as he posed with Jungkook. He also gave a glimpse of Jungkook’s message that read, “Thank you so much for saving my arm… please look after me in the future too! Jungkook.” Sharing the post, he captioned it, “Thankfully, I was able to do a tattoo cover-up for the worldwide group BTS member Jungkook. Before moving forward with the cover-up, we had plenty of conversations and then carefully looked at the parts that needed to be improved both compositionally and a lot of people who come to me put a lot of meaning into the image when getting a tattoo, and Jungkook also went forward filling with tattoos that each had a meaning.”

He added, “All art can be liked or disliked, but to cover up the arm of a worldwide artist, I tried my best and worked carefully on even the small areas in order to become a fitting tattooist. It was also fun working time for me, and I want to say thank you once again to Jungkook who was happy with the work that is currently covered up in order for my nickname that is drawn on Jungkook’s arm to be left with a good meaning, I will do my best to put in the rest of the work coolly. Finally, thank you for the generous compliments about my brand that I have been preparing for 2 years. I will always support the upcoming activities of Jungkook’s.” Responding to the post, Jungkook replied, “Thank you, you are the best !!!”

In several other pictures, an orange flower, a snake and the coloured words ‘winners never quit’ were also seen on Jungkook’s arm. In one of the photos, Jungkook posed for a mirror picture which gave a clear view of his tattoo. He posed with a pout and flashed the peace sign.

Meanwhile, V took to his Instagram Stories and shared a picture of the number ‘7′ on his arm. The BTS member wore a white outfit as he gave a close-up shot of the tattoo. So far, RM, J-Hope, and Jimin have been seen with the friendship tattoo. Jin and Suga are yet to reveal their tattoos.