BTS: V reacts as Choi Woo-shik praises him over golf, duo go out for drinks ahead of Wooga Squad’s In the Soop spin-off 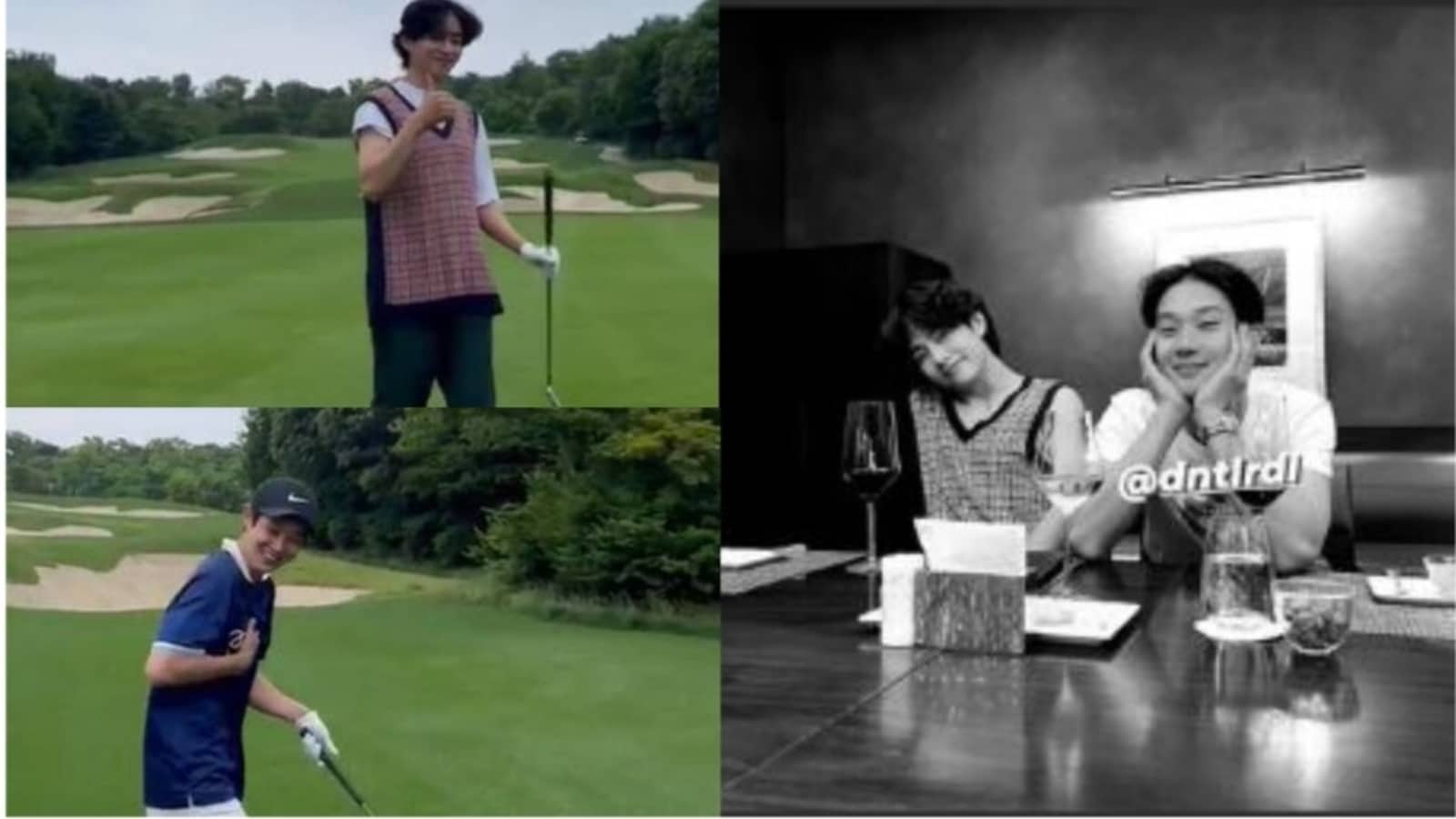 BTS member V and actor Choi Woo-shik spent a day together as they went golfing, had drinks and also posed for pictures. The meet comes ahead of the Wooga Squad’s In the Soop spin-off next month. Taking to his Instagram Stories, V aka Kim Taehyung shared a clip of him playing golf on a golf course. As he hit the ball, a person recording the video, seemingly Woo-shik said, “Good shot. Wow.” A few other people said ‘good shot’ and ‘nice’. As he turned back, V was seen smiling and also flashed a thumbs-up sign as he walked away. (Also Read | Wooga Squad: BTS’ V, Choi Woo-shik, Park Seo-joon, Park Hyung-sik, Peakboy to unite for In the Soop spin-off; fans react)

In another post, V was seen posing for a mirror selfie with Woo-shik. In the photo, V smirked as he looked into the camera. Woo-shik looked away and smiled as he faced sideways for the lens. V wore a beige suit and pants. Woo-shik opted for a white T-shirt under a grey jacket and paired it with matching pants.

V also shared a photo as he and Woo-shik sat inside a restaurant. For the camera, Woo-shik smiled and posed with his hands on his face. V was seen tilting back and smiling. Glasses filled with beverages were kept on the table. V and Woo-shik seemingly enjoyed red and white wine. V tagged his Wooga Squad friend in the post.

Taking to his Instagram Stories, Choi Woo-shik too shared a video of him playing golf. In the first post, sharing the clip, he wrote, “Baby fade.” In the next clip, as he hit the ball, V who was recording the video, softly said, “Shot.” The actor smiled as he walked away with his hand on his chest. Several people praised him saying ‘nice one’ and ‘wow’. He also re-shared V’s restaurant post on his Instagram.

BTS’ V will be seen next with Woo-shik, Park Seo-joon, Park Hyung-sik and musician Peakboy will feature in the spin-off of the reality show, In the Soop. They share a close and warm bond and call themselves the Wooga Squad. V met and bonded with Hyung-sik and Seo-joon on the sets of their show Hwarang: The Poet Warrior Youth (2016). Seo-joon, later, introduced them to his friends Woo-shik and Peakboy.

In the Soop will premier via JTBC in July. The series has four episodes in which V, Woo-shik, Park Seo-joon, Park Hyung-sik and Peakboy will take a four-day and three-night vacation together, according to K-pop Herald. BTS members RM, Jin, Suga, J-Hope, Jimin, V and Jungkook have already starred in two seasons of In The Soop.