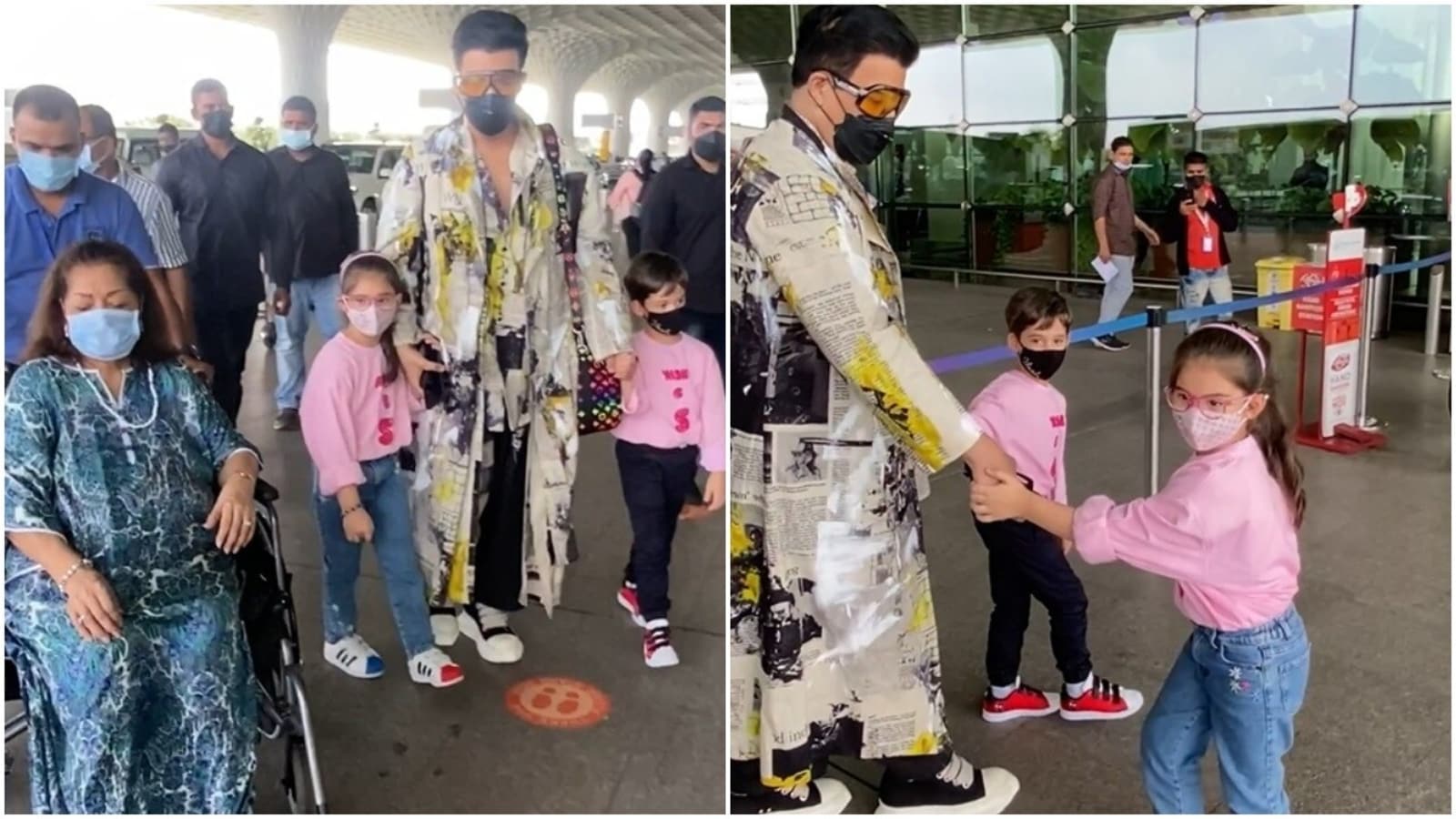 Hours after sharing a video of his son Yash Johar criticising his favourite pose, Karan Johar was seen with his kids and mom at the airport as they all left for a vacation.

Filmmaker Karan Johar has left for a vacation with his mom Hiroo Johar and five-year-old twins, Roohi and Yash Johar. The family of four was spotted at the Mumbai airport on Saturday morning. While Karan was seen in a newspaper-print overcoat, his kids were seen in matching pink t-shirts with their respective names written on them. Also read: Kareena Kapoor says ‘well done beta’ as Karan Johar’s son Yash ‘pout-shames’ him, watch

A paparazzo account on Instagram shared a video of the four of them from the airport. Karan was seen walking towards the airport gate, holding hands of his kids on each side. His mom joined them in a wheelchair. All of them were wearing masks as Covid cases are on the rise in the city.

A fan commented on the video, “Am sure he is a very very caring parent.” Another said, “Yash and Roohi are so cute.” One more called it a “Cute family”. Many however, also commented on Karan’s choice of overcoat and called it a “raincoat”.

Hours before leaving for the vacation, Karan shared a video from his playtime with his kids. The video showed Karan’s son Yash telling the filmmaker about what he doesn’t like about him. He was seen pouting like Karan and said, “I don’t like dadda doing this kind of pose.” Karan shared the video on Instagram with the caption, ““I have been pout shamed!!!!!”

Karan has been busy working on his comeback directorial and attending parties and award nights as of late. He has already wrapped up a schedule of his upcoming film, Rocky Aur Rani Ki Prem Kahani. It stars Alia Bhatt, Ranveer Singh, Jaya Bachchan, Shabana Azmi and Dharmendra.

On Thursday, Karan was spotted at an awards event in Mumbai, where he joined the actors of his production venture JugJugg Jeeyo. He joined Kiara Advani, Anil Kapoor, Varun Dhawan and Maniesh Paul on stage to dance to The Punjaabban Song from the film.