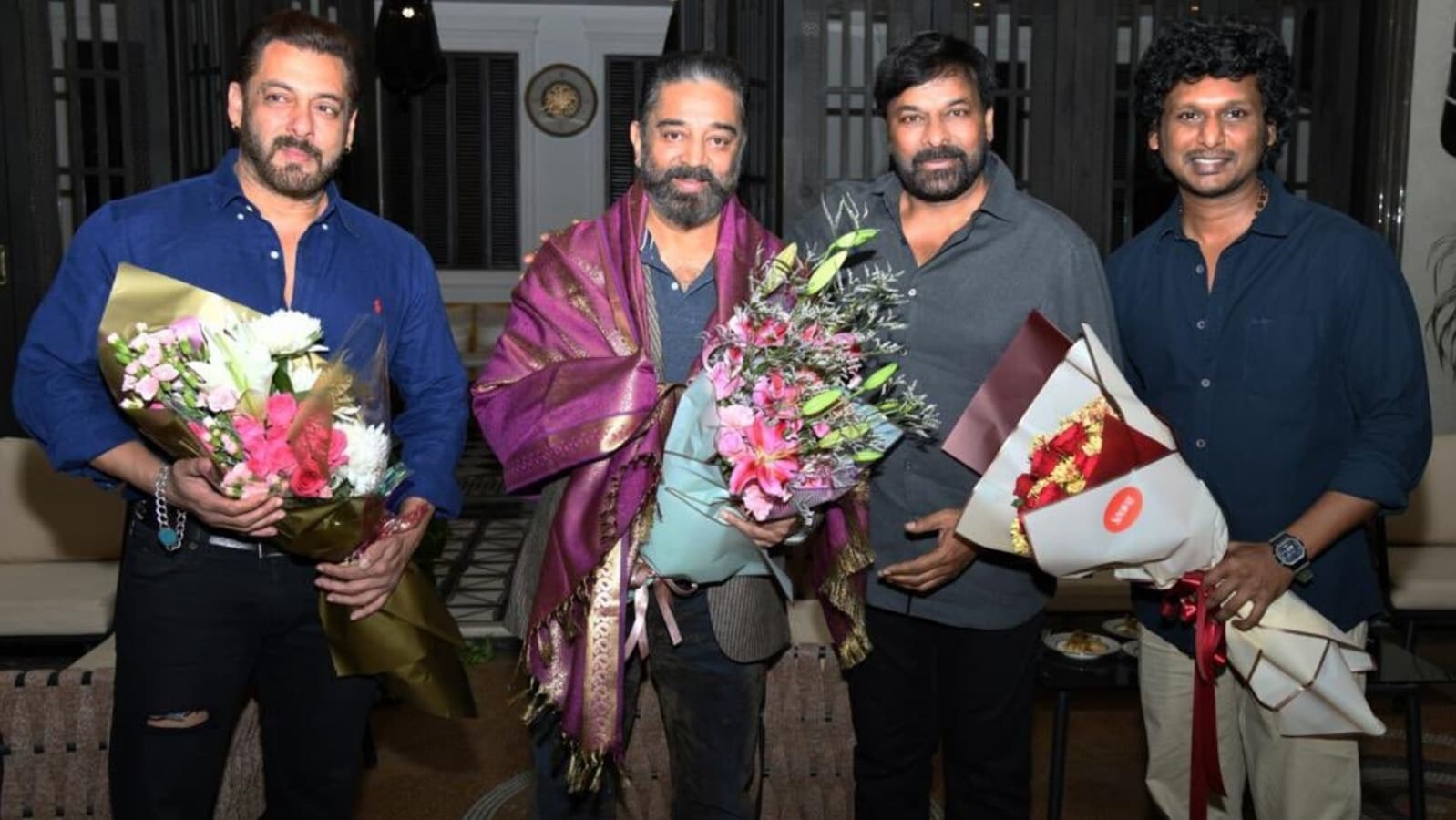 As Kamal Haasan-starrer Vikram continue to soar high at the box office, Chiranjeevi Konidela hosted a success bash at his residence last night. Kamal Haasan, filmmaker Lokesh Kanagaraj and Salman Khan were among the attendees at the intimate celebration. Sharing pictures from the event, Chiranjeevi wrote, “Absolute joy, celebrating & honouring my dearest old friend @ikamalhaasan for the spectacular success of #Vikram along with my dearest Sallu Bhai @BeingSalmanKhan @Dir_Lokesh & team at my home last night.” (Also read: Kamal Haasan-starrer Vikram’s success gets shoutout in Amul topical)

“What an intense & thrilling film it is!! Kudos my friend!! More power to you!” he added to the post. In the pictures, Chiranjeevi is seen welcoming Salman, Kamal and Lokesh with flower bouquets. He is also seen honouring Kamal with a shawl. The pictures are taken inside Chiranjeevi’s house in Hyderabad.

Reacting to the pictures, fans are currently showering love upon celebrities. A user took to the comment section and called them ‘GOAT of their respective Industries’. “This is the BEST Group pic I have ever seen in recent days,” added another one. “When did Sallu come to HYD?” commented someone else.

Vikram is originally a Tamil film, which has been dubbed and released in Telugu, Hindi and Malayalam. It features Kamal in a role he originally played in the 1986 film of the same name. In Vikram, Kamal returns as former agent Vikram of the coveted Black Squad, working for the government. Fahadh Faasil plays the current head of the squad while Vijay Sethupathi plays a drug kingpin. It also has Suriya in a cameo role.

The film crossed the ₹200 crore mark worldwide in less than a week. Elated by the box office success of the film, Kamal had previously released a video thanking the audience for their response to Vikram. In the video, he especially thanked Suriya for accepting his 10-minute cameo and added that he would ensure that Suriya gets a lengthier part in the next instalment of the Vikram franchise.