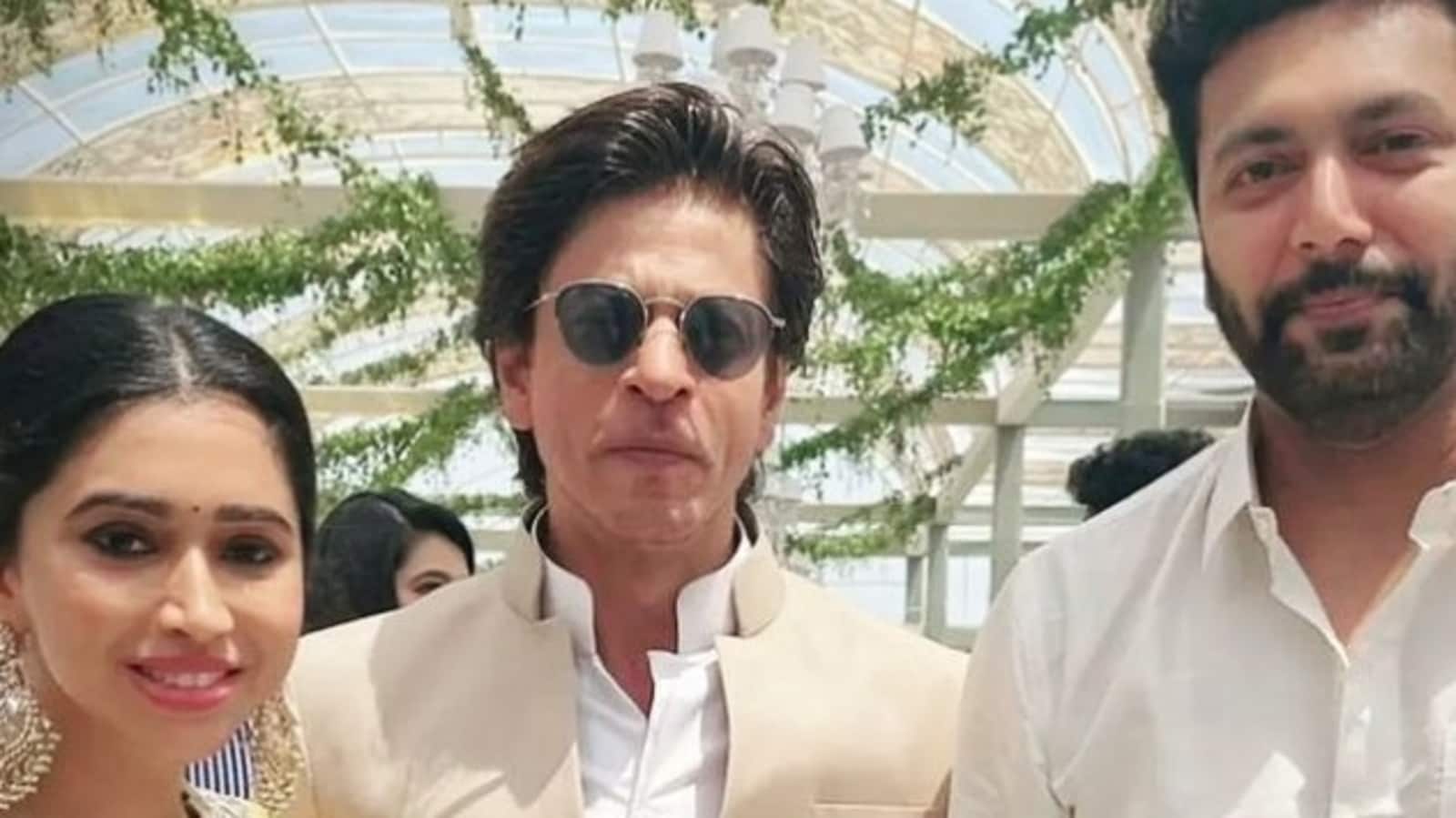 Actor Shah Rukh Khan was in attendance at his Jawan co-star Nayanthara’s wedding with filmmaker Vignesh Shivan on Thursday. The actor graced the occasion in stylish beige coat paired with a white shirt. While Shah Rukh’s manager Pooja Dadlani had shared pictures of the actor ready for the wedding, new pics of Shah Rukh from inside the venue have now surfaced on social media. Also read: Shah Rukh Khan is all decked up for Jawan co-star Nayanthara’s wedding with Vignesh Shivan, reaches Chennai. See pics

In the new pictures from the Nayanthara-Vignesh Shivan wedding, Shah Rukh can be seen posing with actor Jayam Ravi and his wife Aarthi Ravi. In the picture, Jayam and Aarthi are seen flanking Shah Rukh. Jayam is wearing a white shirt and dhoti while Aarthi is wearing a yellow saree. In the background, the wedding décor is visible and a few guests can be seen as well. The picture was shared by Aarthi on Instagram Stories. She wrote alongside, “From a fan girl to meeting you today. Such an honour @iamsrk.”

Several fan clubs of Shah Rukh shared the picture on Twitter and Instagram and many fans praised the actor’s look there. One fan commented on Instagram, “Look at his charm. Even actors can’t resist taking pictures.” Another wrote, “These sunglasses seem to be his favourite.” Many fans commented that Shah Rukh’s stardom is big enough to turn even established actors into fans.

Shah Rukh is reportedly working with Nayanthara in Atlee’s Jawan. The teaser and first look of the movie was unveiled recently. Atlee, himself, was present at the wedding as well. In another picture from the venue by Atlee, Shah Rukh is seen posing with the filmmaker and his manager Pooja Dadlani.

Shah Rukh was last seen on the big screen in the 2018 release Hero. He is all set to make up for that four-year-gap with three big releases lined up in 2023. Apart from Jawan, he will also be seen in Yash Raj Films’ Pathaan, which also stars Deepika Padukone and John Abraham. Then, there is Dunki, which marks the actor’s first collaboration with filmmaker Rajkumar Hirani.