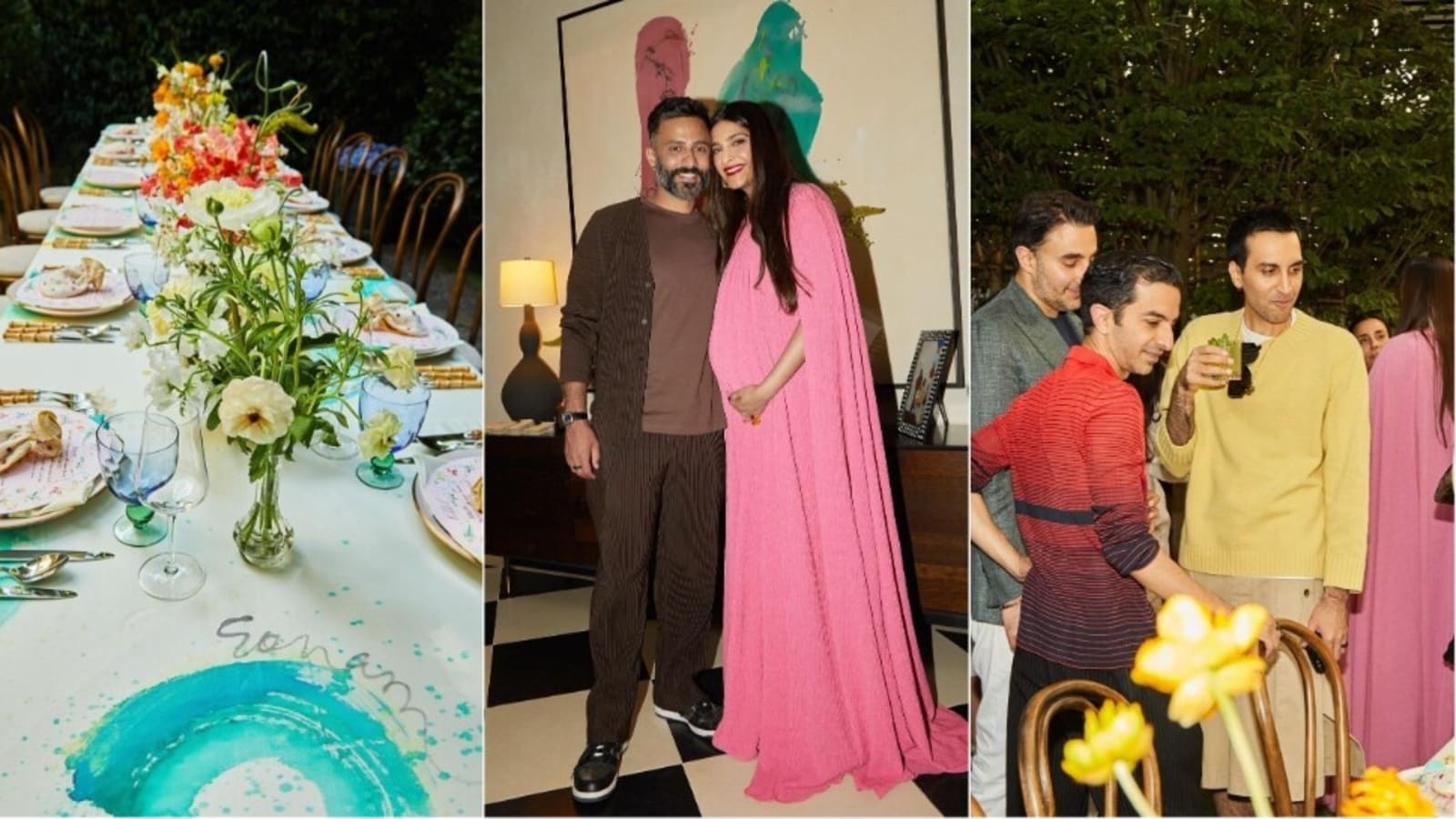 Days after her baby shower, Sonam Kapoor on Saturday shared unseen pictures from the event. Taking to Instagram, Sonam posted photos of herself, her husband, businessman Anand Ahuja, and her guests. She also gave a glimpse of the food, and venue, among other things. Sonam geo-tagged the location as Notting Hill. (Also Read | Anand Ahuja shares new pics of mom-to-be Sonam Kapoor from London, she jokes: ‘I’m a whale’)

In the first photo, Sonam and Anand posed for the camera inside a room. They rested their heads next to each other and smiled while Sonam kept her hand on her belly. The actor also gave a peek of a table, on which a cover was spread with ‘Sonam’ written on it. The table was laden with flowers in small vases and plates with customised menus and small pouches on them.

In the pictures, several bouquets were also seen kept on a table. Several dishes were also placed on a table in one of the photos. Sonam also shared candid pictures of her guests as they spoke with each other and enjoyed beverages. Sonam was also seen seated at a table as she looked away from the camera smiling at someone. Sonam’s guests included Rosie Huntington-Whiteley, Leo Kalyan, Sharan Pasricha, Nikhil Mansata, and Imran Amed among many others. For the event, Sonam wore a pink maxi dress with cape-like sleeves and paired it with gold earrings.

Sharing the post, Sonam captioned it, “It’s all starting to feel real! This baby is now well on its way and I’m so thankful to @eieshabp for throwing the best welcoming party ever, bringing together so many of my favourite people and showering me with love and blessings in the most generous and beautiful way.” Reacting to the pictures, Imran wrote, “The ‘three’ of you are so cute!”

Currently, Sonam is in her third trimester and is often spotted hanging out with sister Rhea in London. Sonam and Anand announced that they are expecting their first child in March earlier this year. The couple shared pictures on their social media accounts and wrote, “Four hands. To raise you the very best we can. Two hearts. That will beat in unison with yours, every step of the way. One family. Who will shower you with love and support. We can’t wait to welcome you. #everydayphenomenal #comingthisfall2022.”