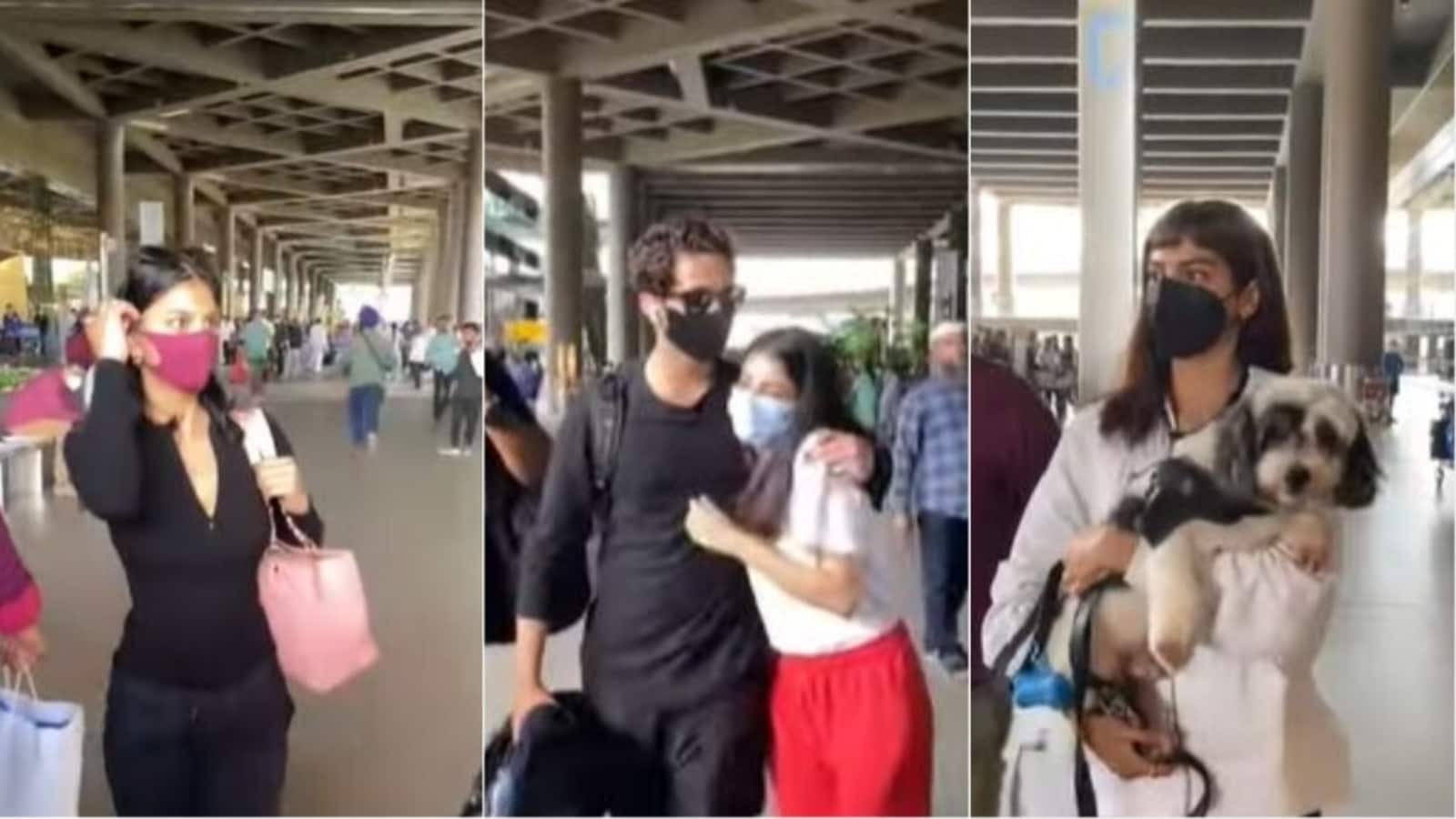 The cast of The Archies including Suhana Khan, Khushi Kapoor and Agastya Nanda returned to Mumbai after completing the shoot of the film. The Archies team was shooting in Ooty. Taking to Instagram, several paparazzi accounts shared videos of the trio as they landed in Mumbai on Sunday. (Also Read | Zoya Akhtar wraps up The Archies shoot in Ooty, Khushi Kapoor shares pics with Suhana Khan and cast)

In a video, Suhana was seen exiting the airport as she was surrounded by photographers. For her travel, Suhana opted for a black full-sleeve T-shirt and matching pants. She wore a pink mask, white sneakers and carried a pink handbag. After exiting, Suhana headed to the parking lot.

In another clip, Agastya Nanda was seen arriving in Mumbai with his friend. His sister Navya Nanda was also seen at the airport as she went to receive him. The duo hugged each other as they exited the terminal. Agastya was also seen jokingly pulling Navya towards him.

For the travel, Agastya also opted for an all-black outfit and white sneakers, similar to that of Suhana. He also carried a jacket and a backpack. Navya was seen in a white T-shirt and red pants. Both of them had masks on their faces. While walking they chatted and teased each other.

Khushi Kapoor was also seen at the airport as she travelled from Ooty. She was welcomed by her dog whom she petted and carried in her arms as she walked. She also met Navya and they spoke for a few minutes. Khushi was seen in an all-black ensemble but she added a white jacket. She wore sandals and carried a bag.

Earlier in the day, filmmaker Zoya Akhtar shared a post on Instagram announcing the first schedule wrap of her next action musical drama, The Archies. She posted a picture in which the word ‘wrap’ was seen written. Sharing it, she captioned the post, “It’s A Sign #schedulewrap #thankyouooty”. The Archies is based on the American comic series of the same name.

Based on the backdrop of the 1960s, the film marks the debut of Shah Rukh Khan‘s daughter Suhana, producer Boney Kapoor and late actor Sridevi’s daughter Khushi and actor Amitabh Bachchan‘s grandson Agastya Nanda. The film is slated to release on Netflix. The release date of this action musical drama movie is still awaited.